an object of interest

November 11, 2010
I bought this recently at a guerilla art show: 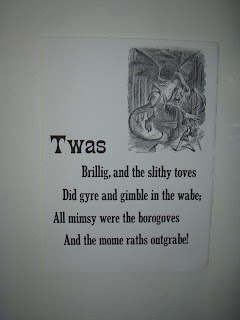 Here it is hanging in my office: 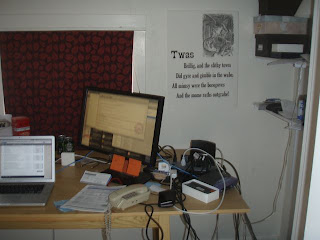 The poster caught my eye because I've loved the Alice books all my life and I re-read them often. I am especially fond of the Tenniel illustrations, and the one for Jabberwocky is a favorite.

The poster also caught my eye because of the odd and interesting typeface. The story behind that typeface is fascinating. I asked the artist to send me that story in email so that I could have it written down:

The story is this:
Just south of where I grew up (near Green Bay, WI) is the Hamilton Wood Type Museum. A while back, I visited armed with a few sheets of printmaking paper with the goal of printing some or all of the Jabberwocky poem from some original wood type. During the course of the 19th and 20th century Hamilton made wood type for advertisements and headlines and circuses and had gone on to accumulate wood type from other manufacturers who had given in to market pressures or the eventual obsolescence of the letterpress industry. What remained when I visited were cases and cases of cabinets full of uncategorized type.. roughly 1000 different type faces and sizes. I spent a better part of a day just finding a type face I liked, using a rather capricious method to determine "the one": the style of the lower case 'g'. I estimate the type to have been produced in the early 20th century, probably for about 20 years, if that. It is an obscure, unnamed type face. I set the type but realized that by choosing according to lower case 'g', I had picked a case that only let me set 3 lines of text. This was all that was left of this type in existence. So, I printed the top three lines first on a large flat bed cylinder press called a Vandercook 325G (incidentally I have the exact same model press in my shop here), disassembled the text and composed the 4th line. When I returned to Colorado, I replicated the illustration from Through the Looking Glass and then added that to the print.
That's the story.
Enjoy
Dan

Zeger Van Hese is a Belgian software tester who, like me, is interested in critical theory and what application critical theory might have to the work of creating software. The other day he mentioned in passing a seminal work by Walter Benjamin, The Work of Art in the Age of Mechanical Reproduction that I had not read in many years.

In the light of Benjamin's work, my poster is a strange object indeed. While it was created in a process of mechanical reproduction, it was created only once. The means to create it are lost in an anonymous bin in an obscure warehouse somewhere in Wisconsin. And even if someone were dedicated enough to find that one particular bin, not even enough of this particular wood type exists to even print all four lines from Jabberwocky.

My poster would have been a strange item even for 1936, when Benjamin wrote about mechanical reproduction. But to have such a thing on my wall in 2010 is, for me, astonishing.