mind maps for testing and other things 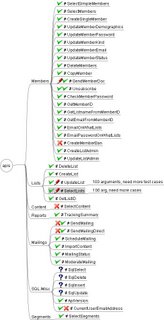 I learned about mind maps at Thoughtworks, where they had been in use for test case management (and lots of other things) long before I arrived. The key advantage of mind maps, as Robert Sabourin points out in the article, is that "...misunderstandings and ambiguities are exposed and resolved in real time as you build the mind map".


That sounds too good to be true, but it really does work like that. They are also readable, easy to construct, portable, and attractive.


Here are two other ways I used mind maps that were very, very effective:


Architecture:
My former colleague Dragos Manolescu uses mind maps when designing systems. He's produced some spectacular work. One I remember had to be printed on a plotter, and was about 6 feet high and 3 feet wide-- but quite readable. It was SO MUCH BETTER THAN A DESIGN DOCUMENT.


Although mind-mapping works just fine with colored pencils and paper, I really recommend FreeMind, it's a very east to use, very popular, open-source mind-mapping tool that will save the diagrams in an number of formats, including jpeg.